This lovely post appeared on the wonderful and far ranging Religion and Feminism Blog.  Judith Shaw kindly gave me permission to repost it. I am posting the beginning of the article below (notice her spectacular artwork) with a link to the rest of it (and more of Judith’s art):

The otherworldly energy of Snake – it’s vitality, its uncanny ability to sense danger, and its ability to shed its skin and reappear as if reborn must have invoked feelings of awe in our ancestors. All across the pre-historic world one finds depictions of Snake and the spiral or meander as Snake’s symbols.

Creation, Primal Energy, Life Force
Snakes are mysterious, cold-blooded creatures –  slithering silently across the land, sleeping with open lidless eyes, hearing without ears but by feeling Earth’s vibrations, and using their forked tongues to smell in lieu of a nose. 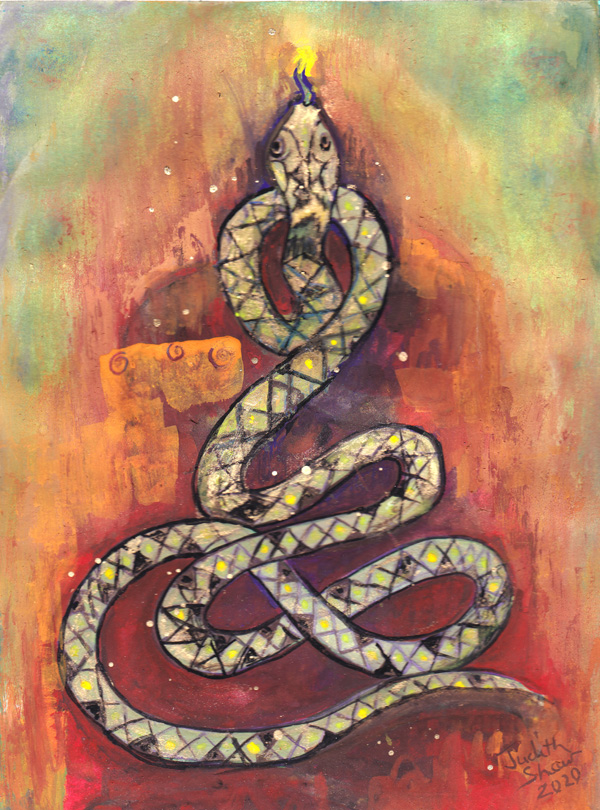 To the human imagination this enigmatic being is both chthonic and spiritual – tying together Heaven and Earth. Though no stories survive from the early Neolithic period of Old Europe, the preponderance of imagery leads us to the conclusion that the Snake Goddess, often appearing as one with the Bird Goddess, was felt everywhere – ruling earth, water and air – nurturing the world with the feminine principle – Mistress of life-giving cosmic forces.

The Serpent and The Goddess by Judith Shaw

One Gods: The Mystic Pagan’s Guide to the Bible

When Eve Was A Goddess

When Moses Was a Shaman